Marques : "Panavision Panaflex" ; "Super Panavision 35" ; "Mfd. and prop. of Panavision Los Angeles CA USA Ser. n° PCV 183-W" ; "Panavision AV Video Pav. 122".
"The Golden Panaflex, the world's most sophisticated motion picture camera, is literally the product of those who use it, for it has continously evolved into its present form through the suggestions and ideas contributed by the Directors of Photography, Operators, and Assistant Cameramen who recognize the Panaflex as the world's premier professionnal filmmaking instrument. Since the fall of 1972 when the original Panaflex camera was introduced, Panavision has actively solicited feedback from those who operate our equipment. On the basis of that information scores of modifications and improvements have been retro-fitted to the entire universe of Panaflexes. Panaflex 1 is as state-of-the-art as the latest serial number. The Panaflex was conceived in 1968 by Robert E. Gottschalk, who recognized that the PSR camera, while in constant demand, did not represent Panavision's full design capability. The PSR was an elegant conversion, but it was a camera in a blimp, and though significantly lighter and quieter than other studio cameras, was still cumbersome and heavy. An intense and highly secretive R&D team was set up to create what Robert envisioned as "a totally new generation of cameras". He saw a film-making instrument with features more advanced than those of any existing studio camera, yet light enough to be easily hand-held - a very compact, inherently quiet, silent reflex camera of impeccable design and versatility. Four years later Panavision designers, engineers, and craftsmen perfected the now-and-future camera would quickly earn a reputation as the industry's most reliable and flexible filmmaking tool. The first feature to be filmed with the Panaflex was Steven Spielberg's The Sugarland Express with Vilmos Zsigmond, ASC, as Director of Photography. In addition to Robert E. Gottschalk, the Panaflex design team included Al Mayer, Tak Miyagishima, Oliver Conway, George Kraemer, and Jack Barber. In 1978, the Panaflex was awarded an Oscar by the Academy of Motion Picture Arts and Sciences for its outstanding contribution to the art of film-making. [...] The most recent innovation, those that have earned the Panaflex its "Golden" designation, include a number of important advances. Most significant is the Ultraview Reflex Viewing System, an entirely new optical viewfinder with a substantially brighter, larger and easier to view image. Described as "brighter than life" by many who have used it, the viewfinder affords excellent eye relief and, in the hand-held mode, permits the Operator to use either his left or right eye. The Golden Panaflex "G" Drive System - a totally new set of sophisticated electronics on four personalized circuit boards. [...] Movement : Dual pilot-pin registration. Double fork pull-down claws simultaneously engage two perforations. Adjustable pitch control for "extra-quiet" operation. Aperture plate is removable and contains integral matte slot. Full aperture : .980" x .735", Academy aperture : .868" x .735". The entire movement may be quickly removed from the camera for cleaning and maintenance. Shutter : 200 degrees variable to 50 degrees with rotating mirror, calibrated in 10 degree increments. Adjustable manually forward or reverse. Exposure is 1/43rd of a second at 24 fps with shutter set at 200 degrees. Viewing system : "Ultraview" reflex viewfinder produces a brillant full-size, correct image. Viewfinder system features a de-anamorphoser and a 2X magnifier with more than ten times magnification in studio mode. The finder incorporates an adjustable eye-piece, two viewing filters, and a light valve which can be closed when reflex viewfinder system is not in use. Viewfinder may be rotated 360 degrees with image always erect. The adjustable Panaglow (a Panavision original) when activated, causes the frame lines on the ground flass to glow red, enabling the Operator, even in very low light levels, to see the precise position of the frame lines. Panaclear : ever since reflex cameras were developed, Operators have complained about viewfinder eyepieces misting or fogging up from their body heat in cold or humid weather. To eliminate this problem, Panavision devised the Panaclear to heat the eyepiece optics and demist them. Unique features : - Camera can be converted from studio mode to hand-held in less than 60 seconds ; - Tachometer and footage counter are bright digital displays ; - Red and green lights indicate battery condition ; [...] Four distinct types of matte boxes from lightweight hand-held to full-size with studio base plate ; [...] The Golden Panaflex weighs less than 25 ibs, with 250' magazine" (Brochure The Golden Panaflex, Tarzana, California, Panavision, 1983). 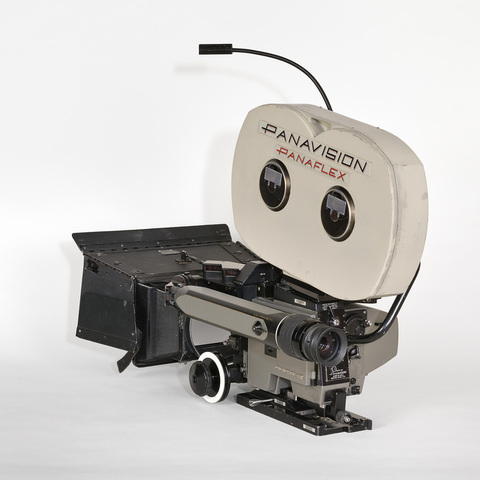