"A new 16 mm projector. The mechanism of the Model G Kodascope is completely housed in aluminium die castings, and is held to close tolerances both in parts and in assemblies. All shafts are ground to insure straightness, finish, and size. [...] The intermittent movement consists of a tandem claw selectively hardened at points of wear, actuated by a Lumiere-type cam for the pull-down stroke, with a second cam governing the in-and-out movement. The Lumiere cam and the pull-down claw are fitted together and kept in pairs during assembly. The periphery of the Lumiere cam is ground on a special grinder used only for this purpose, the overall distance across its face being held within a tolerance of 0.0003 inch measured at any point. With this refinement and care in assembly, the operation of the mechanism is exceptionally smooth and quiet. [...] Stills are shown by merely declutching the mechanism from the motor, at which time an automatic safety shutter swings into position to protect the film while the motor and fan continue to run for adequate lamp protection. By throwing a switch, the motor is reversed and pictures may be projected backwards. Framing is accomplished by shifting the pull-down claw in relation to the aperture so that there is no movement of the picture on the screen. Sprockets, sprocket guards, film-gate, aperture plate, and pull-down claw are all designed to operate sound-film without injury. Two features of the Model G deserve special mention. The first is the rewind. For rewinding, the movement of a single lever engages the rewind drive and releases the take-up reel. [...] Second, a single switch controls motor, threadlight, and projection lamp. This switch has four positions : in the first position, motor, threadlight, and lamp are turned off ; in the second position, the threadlight is turned on ; in the third position, the motor is started and the threadlight remains on so that the operator can momentarily check his threading ; and in the fourth position, the motor continues to run while the projection lamp is turned on and the threadlight is turned off. A single knob adjacent to this switch controls the motor speed. [...] The lamp house and the fan are designed to give adequate cooling for high-wattage lamps, insuring ample lamp life. The optical system was specially designed, and is remarkably efficient both as to picture quality and screen brilliance. [...] The machine is finished in hand-rubbed glossy black lacquer, with all fittings in buffed chrome plate" (Journal of the Society of Motion Picture Engineers, 1938, p. 410-413).

"An Aristocrat in every detail, Kodascope G meets the most exacting demands of the most advanced movie amateurs. Yet its operation is so simple, so logical and convenient that beginners immediately appreciate and use its many advantages. "Taylor-Made" projection, with five lenses and three lamps available. A threading light, illuminating the film path so that the operation can carry out the few necessary threading adjustements in an otherwise darkened room without delay or fumbling. This light automatically goes off as projection begins, and may be relighted during rewinding. Projection of any single frame of your movies, as a still, with full automatic protection of the arrested film. Simplified film threading. A hinged film gate, permanently positionned, opens wide, affording ample finger room ; the film slips into proper place accurately and easily. Variable projection speed" (Catalogue Fotoshop Inc., New York, s.d., p. 94). 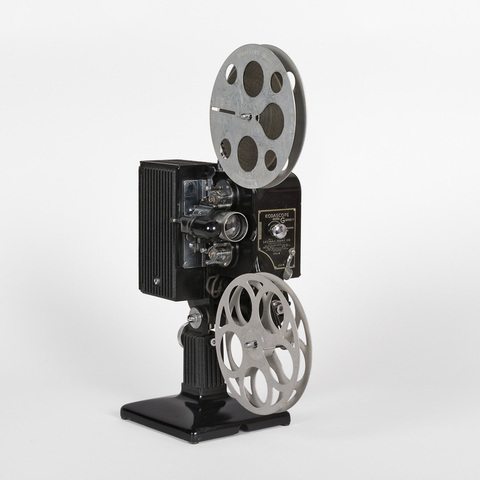